This week has been rough, running-wise. I've either got some sort of bug, or I'm having an "auto-immune thing." That's what I've started calling the "my glands are swollen, I feel like I'm getting sick, but no one around me is sick," stuff that I get frequently. Either way, I haven't felt awesome. I pushed through it on Monday and did three miles anyway, but the last couple of days, I've just stuck with walking at work. So today, I drug my hind end out of bed and told myself I could just walk. ... I'm so sneaky.

Nine times out of ten, once I start walking, it eventually turns into a run. I did end up walking for ten minutes before decided to see how running felt. I was able to finish out three miles and now at least my legs feel awesome.

I've been a bit hit and miss with my running lately. Averaging two to three three mile runs a week with a four miler on the weekends. While that's certainly nothing to sneeze at, I'm not really working towards anything right now, and I think I get more satisfaction when I have a goal, so I'm thinking about training for a 10k or maybe a half.

Since having S, and finally getting back to running the last year and a half, I've avoided doing more than six miles because of my weight. While it's been on a SLOW, but steady decline (then flattening out into unintentional maintenance mode the last six months), I'm not quite as light as I'd like to be before getting into the higher mileage. The reason for this is twofold (yup - twofold): one - the first time I tried to train for a half, I was a few pounds heavier than I am now, and once I got up to seven miles, my knees were NOT happy and that was before I had psoriatic arthritis.

The second reason is time/speed. I think, in the back of my mind I've been assuming that as I get lighter, my speed will pick back up to where it was - and let's face it, running long distances REALLY slow take a LONG time.


That being said, I think I'm going to search for a plan that incorporates some speed work with a longer run on the weekends. Brilliant, right? I know, I know, I should totally coach. :O) 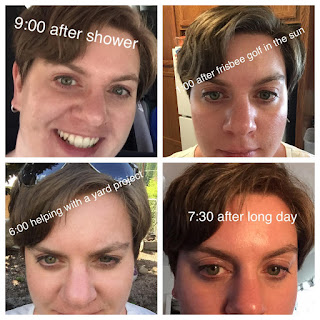 Speaking of long run on the weekends, a couple of weeks ago I had some fun and did a test of the new Enduring Eyeliner I ordered. It's supposed to be practically bullet proof, so I decided to test it out on a long run. I put some on my eyes, of course, but also drew a smiley face on my forehead to see if it would stand up to all of the sweat.

The result? My eyes were perfect, not a smudge or smear. They even held up after a shower and a full day of activities, including yard work in the hot sun. I was impressed!

Unfortunately, the smiley face didn't make it. Apparently sweating profusely and then wiping at your forehead was too much, but I suppose that is fairly reasonable.

So, if you are looking for something that will stay on your EYES for a long run, let me know, and I can hook you up with the perfect eyeliner. If you're looking for a way to keep drawings on your sweaty forehead, sadly I cannot help you.

Hope everyone had an awesome run today, or has one in their near future.

"The only bad workout is the one you didn't do." We've seen this all over, right? Well, let me tell you, I had a bad run yesterday. Don't get me wrong, I'm still glad I did it, but MAN it was rough. 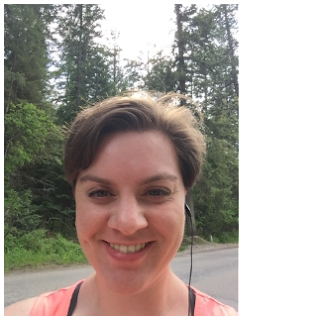 I mentioned in my last post that I'd had in interruption in my antidepressants that led to a seriously unpleasant mood shift. While that is getting better, it's still not quite back to normal yet. That on top of some general life stress put me in a really nasty funk last night. So I decided to go for a run outside. (If you've followed me for very long, you'll know that outdoor running is pretty rare for me).

Whelp...it sucked. I felt like a clumsy elephant. Everything hurt - my muscles were screaming at me, my joints weren't happy, and I felt like I could feel every single extra pound as my feet hit the pavement. So I stopped to walk. I thought, "it's ok, I'll warm up." Noooopppeee. Every time I tried to pick back up to a gentle jog, my body rebelled. I seriously felt like I hadn't been running in months. It sucked. Did I say that already? Well, it bears repeating.

Having a bad run when I needed that run to help my mood also was not good. I almost started crying. But then, I took a deep breath and looked at the beautiful evening and the green trees and perfect weather and made myself smile until I meant it. I reminded myself that I like walking and that there is no shame in needing to take it easy if that's what my body is telling me to do. Once I embraced the walking, I was able to relax and enjoy it. I tried a few pick-ups, discovered that things were not inclined to change, and went back to walking and listening to music. By the time I got home, I was in a much better mood. It wasn't as good as a run, but it worked well enough.

Email ThisBlogThis!Share to TwitterShare to FacebookShare to Pinterest
Labels: Running

Ow! Haven't Done That in Awhile

Holy sweat, Batman! I'm toying with the idea of re-starting one of the Beachbody programs to help me get in a routine with strength training. I was planning to start another round of P90x, but since we moved all the workout stuff downstairs, we haven't moved the pull up bar yet, so I decided to try one of the T25 workouts. 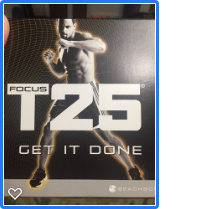 The good: at 25 minutes, I was able to get a good sweat and still get in a couple of miles on the treadmill. Also, I'm crazy sore, so clearly it works.

The bad: I was reminded why I didn't like the T25 workouts. For one thing, it's pretty jarring on the joints. You can do the modifications, but then you don't get nearly as good a workout. I tried to do a bit of both, but MAN my knees were not happy about it later.

The main thing I'm not a fan of, though, is the boring music and relatively boring moves (probably largely due to lack of music). So, basically, the short workout is offset by the fact that all 25 minutes are unpleasant, and not just in the "this is hard" kind of way. I like to at least have the "this is hard, but fun" kind of feeling.


Like I said, I am a big fan of the fact that I was then able to do two miles on my treadmill. Speaking of treadmills, I don't think I introduced you to Miles' successor - Treadwell - he's British. Fortunately, my sister had a treadmill that she wasn't using, so she gave it to me. It is a model or two older than Miles was, but it works just fine. Eventually, I'd like to save up for a treadmill with all the bells and whistles, but for now it's really nice to have gotten one for free!

While I ran, I gave Zombies Run another shot and was able to keep the supplies I collected and work on building a base. I'm anxious to get further into the missions and see what it's like. Because I lost my spot last time, the mission part was a repeat of what I'd already done. The supplies that you pick up do seem to be randomized, because they were different this go around. 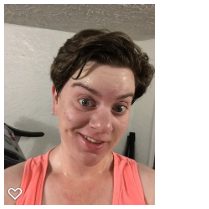 Honesty time: last week was TERRIBLE calorie-wise. I had an interruption of my antidepressants and it caused my mood to seriously go off the deep end, which seems to have triggered a "let's go for the high-score in calories" response in my brain. So last week as a food-a-palooza. I am getting back with it this week. I do not like feeling semi-out of control with food and I am seriously buckling down this week to get my attitude towards food back into a healthier place. I'll keep you posted on how that's going.

LazyRunnerGirl
Hi! I'm Megan and I am currently working my way back to running. I ran a marathon, took a break from running, gained weight, got pregnant...gained more weight and was unable to run for several months. Now that I have a beautiful baby boy, I am starting from scratch and working to rediscover my inner runner. Come join me on my journey to get healthy for my family and laugh with me at my inevitable blunders in new parenthood.